I KNOW quite a few jewelry makers who like to join Blog Hops and Challenges because, as they say, it forces them to get creative, to get them out of a slump and DO something. I don’t know how they are doing this, as obviously that doesn’t work for me. Last year I spectacularly failed not one, not two, not three, but four Hops/Challenges, so I was very hesitant to pick up any this year.

However, when I saw the announcement for this year’s Challenge of Travel by Erin Prais-Hintz of Treasures Found :: Inspiration Is Everywhere pop up on my reader (which was one of the four I failed last year), there was no way I could resist at least trying – the theme was simply too intriguing to pass up: Staycation. Or, as we Germans say: Urlaub auf Balkonien (vacation in balconia).

While last year’s theme was a trip around the world, this year’s idea was to explore your own hometown and draw inspiration from this.

SO, herzlich willkommen to Wiesbaden, the capital of the federal state of Hesse, Germany. It is one of the oldest spa towns in Europe, going all the way back to Ancient Roman times, known for it’s numerous hot springs. Their waters are supposed to help with various ailments, such as rheumatism.


THE springs were even mentioned in Pliny the Elder’s Naturalis Historia. The town’s name actually translates to “meadow baths”, but by the Romans it was referred to as Aquae Mattiacorum, “Waters of the Mattiaci”. At one point Wiesbaden sported as many as impressive 26 springs – most of them are out of order now, or fed into a network which supplies thermal baths or is used to heat the town hall. The ones accessible by the public are certainly among Wiesbaden’s most famous tourist attractions. I even learned about one I totally didn’t know about!

ACTUALLY, there’s so much more to see in this town, but I’m already late with this post, so I'll save it for another one … Plus, I remembered about this challenge two days ago? Woops, I (almost) did it again. So, without further ado, my creation “Aquae Mattiacorum”, inspired by Wiesbaden’s hot springs: 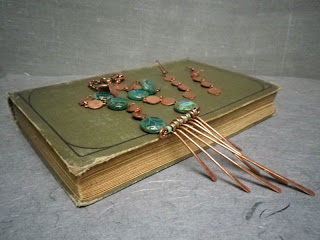 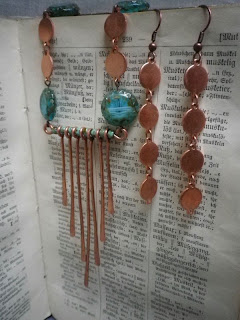 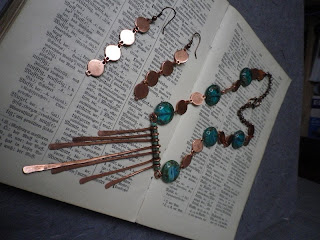 IT HAD to be a fringe necklace. The colors were inspired by the springs and their minerals. Hammered copper wire, bits of "coin" chain I received in a Muse Box from www.bsueboutiques.com/, TOHO beads with a picasso finish from www.wahnmachtsinn.de, and coin shaped Czech beads which reminded me of water as well as ancient coins.

THANK you for visiting. If you want to know more about Wiesbaden, stick around and add this blog to your newsfeed/blogger. If you want to hop along and see what everyone else created for this year's Annual Challenge of Travel, please visit: http://treasures-found.blogspot.de/2013/08/2nd-annual-challenge-of-travel-stevens.html and scroll to the very bottom to the link list. 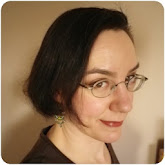 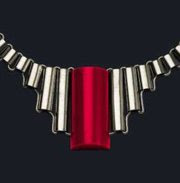